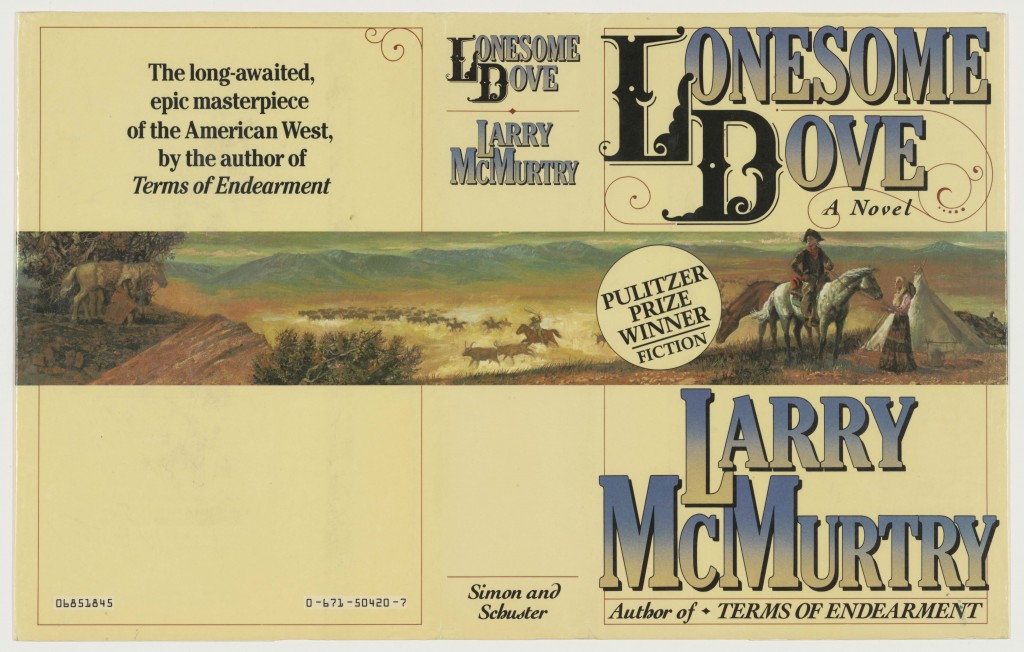 I finished Lonesome Dove by Larry McMurtry this week. I started it as I was pushing through the last quarter or so of J R – after meeting my quota of pages in that book, I would decompress my brain a bit with Lonesome Dove. Its clear, orderly, perfectly uncluttered prose, slick, competent, and unadventurous, took the edge off of the headfires that the complicated architecture of Gaddis’s second novel occasionally induced as I raced to finish it.

None of this is original, but: one readerly phenomena I’ve been particularly attuned to lately is how books age in our minds after the reading’s done. No piece of art is static; the best books get bigger in the mind, exhibiting new doors, unfamiliar staircases, a window overlooking a hidden garden when we return to them, like houses we visit in a dream. Others age badly, deteriorating across the arc of a short half life. A rare few appear to be shrinking, but somehow, at some point in accordance with the changing attunement of our own brain, start to grow big again, achieving if not their original or greater dimensions, then at least something more dignified than the heap it looked like they were becoming.

I’m not sure how Lonesome Dove will age yet. I did enjoy reading it. Here is a first round of notes on the book.

The book is famous, but the miniseries that it spawned is arguably even more famous. I haven’t seen it.

The core of the Lonesome Dove plot is a cattle drive undertaken by the Hat Creek Cattle Company, from Lonesome Dove, Texas all the way up to Montana. The drive is lead by two aging ex-Texas Rangers, Woodrow Call and Augustus McCrae. In the first 250ish pages they bicker, slack off, drink, break horses, and then finally recruit a crew, steal thousands of cattle from Mexico, and head north. The drive is long, arduous, full of dangers big and small, obvious and subtle, overtly antagonistic and natural. McMurtry hangs several subplots onto the framework of this cattle drive, each moving toward resolution at their own particular momentum; some come and go quickly, others run parallel to the main plot for the duration of the novel – which, by the way, is about 950 pages long.

Yes, it’s a big book, but reads extremely fast. Not because the story is exciting (although it often is), but because the prose is so light – undense, almost transparent, nearly weightless. Coming to Lonesome Dove after reading two other, for me foundational Westerns, Warlock and Blood Meridian, I was surprised at the nearly ephemeral quality of the prose and aesthetic here. Calling it flavorless does the book a great disservice, but there is no rigorous aesthetic imperative informing Lonesome Dove. The prose is laconic, matter of fact, just ever-so-slightly canted with the lightest of antiquated diction.

Which is weird, this sparseness, because – incorrectly or not – I’ve been trained to expect lavish descriptions of the frontier from my Western novels. And I particularly expected it from a book that sees the “Greatest Western” sobriquet often laid at its feet. This description of Montana is about as baroque as Lonesome Dove ever gets, and it rarely even goes this far:

The cowboys had lived for months under the great bowl of the sky, and yet the Montana skies seemed deeper than the skies of Texas or Nebraska. Their depth and blueness robbed even the sun of its harsh force – it seemed smaller, in the vastness, and the whole sky no longer turned white at noon as it had in the lower plains. Always, somewhere to the north, there was a swath of blueness, with white clouds floating in it like petals on a pond. (pages 829 – 830)

Pretty, but still veering towards functionality over flourish.

So what did McMurtry fill this 950-page novel with, if not lyrical passages delineating the cruel beauty of the West?

Many things happen in Lonesome Dove. Almost uniformly, they’re described with the terse efficiency of a computerized cashier telling you that your card has been declined. Even the action scenes aren’t expansive. They usually resolve in a page or two, max.

This actually works for me. Things happen very fast: bullets or arrows fly, animals attack, people are killed, horses die, and it’s over. One undeniably fact of the West is the frighteningly thin line between life and death. This can take the form of the usual cowboy bullshit: bumping into the wrong feller on the way out of the saloon and shooting him down, etc. But it also encompasses accidents, snakebites, the terrifying onset of incurable illnesses. Cowboys can be trampled to death, impaled by an angry bull, mauled by a bear, bitten by a snake, they can die from exhaustion if they get lost without a horse. These things, and the threat of these things, Lonesome Dove portrays tersely, vividly.

Conversely, the descriptions of nature are underwhelming. There’s a big difference between telling a reader a terrible sandstorm happened, and making them feel it right in their fucking brain-nerve. The casual, nearly-bland prose serves the violence well, but doesn’t deliver the scenes of natural devastation to the heart in the same way.

Everything that happens in Lonesome Doves happens fast. I mean that on a structural level. The longest chapters can be breezed through in 20 minutes, maybe 30. On that structural level, the only thing McMurtry lingers on are all the various subplots. He’s happy to take a break from the drive to introduce new characters and new struggles, and to return to these later. I’m not sure if this is a good thing or a bad thing.

Kind of odd, isn’t it, that rich talk is such an integral part of the Western genre? I’d imagine most cowboys were fairly taciturn. There’s a strange but funny scene at the very end of Lonesome Dove. Call is returning south from Montana to bury Gus. Somewhere on the endless plains he encounters Charles Goodnight, a real historical figure, evidently a well-known person in rancher mythology. He was one of the inspirations for the character of Woodrow Call, so this scene of the two men meeting is a random jag of metafictionality in the midst of a very traditional novel.

Anyway, the real cowboy and the fictional one talk briefly, and at the end of it when Call asks if Goodnight is going into town to see the execution of a famous criminal, Goodnight says:

“No, Goodnight said. “I don’t attend hangings, although I’ve presided over some, of the homegrown sort. This is the longest conversation I’ve had in ten years. Goodbye.” (page 935)

I find this howlingly funny. This is probably too pat of a read on it, but I wonder if this scene is some kind of commentary on the gap between cowboys in reality, and cowboys in fiction? Call is mostly taciturn himself, but even he has a delightfully pungent way of speaking, and probably talked a sight more than real cattlemen like Goodnight. Volume of talk aside, he was almost assuredly more eloquent.

Lonesome Dove has an unproduced screenplay as its distant predecessor, and McMurtry has been tied up in Hollywood for many years, so it’s no surprise that the dialog in Lonesome Dove is plentiful and excellent, and behind one other element (which it is intimately linked to) is the presiding thing that lingers in my mind. Here’s a representative example taken, in the tradition pioneered by the inimitable GreatSFandF.com, more or less at random:

“I couldn’t hear Jehovah’s trumpet from no five miles off,” Augustus said. “Anyway, we ain’t the only thing in this country that can spook cattle. A lobo wolf can spook them, or a lion.”

“I didn’t ask for a speech,” Call said. “It’s foolish to take chances.”

“Some might think it foolish to try and steal horses from the best-armed ranch in Northern Mexico,” Augustus said. “Pedro must work about a hundred vaqueros.”

“Yes, but they’re spread around, and most of them can’t shoot,” Call said.

“Most of us can’t either,” Augustus said. “Dish and Newt ain’t never spilt blood, and one of ‘em’s drunk anyway.”

“I wisht we had one along,” Augustus said. “I’ve seen possums that could outthink this crowd.” (page 115)

So, Augustus McCrae. On at least one level the entire book is about Gus. I didn’t know this before researching the book but Gus has strode right into the same romantic, mythic empyrean where Wyatt Earp, Doc Holiday, and other well-loved murderers go to be immortal.

Calling Gus a murderer does him some degree of disservice, I guess. But he does kill the most people throughout the book.

Anyway, an excellent article by John Spong at Texas Monthly compiles memories from many different people involved in the Lonesome Dove universe. One memory from Steven Davis, assistant curator at Texas State’s Southwestern Writer’s Collection, describes some folks’ reaction to the prop of Gus’s dead body from the miniseries:

“The exhibit draws people from all over the world, and when they see the prop of Gus’s dead body, it makes some of them weep all over again. I’ve seen people drop to their knees and pray.”

Friends, that is fuckin’ nuts. But the image of people weeping over this dead Gus prop in a museum of sorts dedicated to Lonesome Dove speaks to the contradiction at its heart. Despite its purported revisionist aims, Lonesome Dove still romanticizes the West.

I think a lot of the romance comes from Gus. Semi-educated, intelligent, sensitive, witty, talkative, romantic, with an appetite for life and everything in it, an espouser of homey-sounding apothegms about seizing the day etc., a profoundly talented fighter with incredible eyesight, Gus is, simply, larger than life. People like him may have existed, but I’ve never met any, and I doubt any of them were cowboys.

A note: one weird trait that Gus shares with Judge Holden from Blood Meridian: he enjoys being naked and is comfortable being naked around the cowboys.

Undoubtedly, Gus is a great character, an absolute delight. But he’s also an improbable one, and I think to a degree he sabotages the intent of the book. If you want to deflate the cowboy mythos, why make the central character one of the most improbably charming and cool cowboys that ever existed?