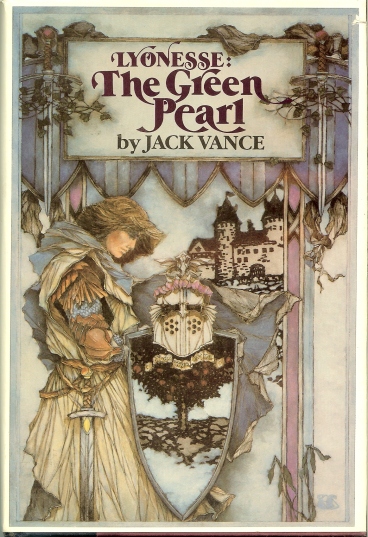 Haven’t read much this week, but I’m on the verge of finishing Suldrun’s Garden. I have just under 100 pages left; once I get under the 100 page demarcation, the next time I pick up the book I almost always commit to reading to the end in one go.

Naturally, I’m going to read The Green Pearl next. But there’s been an oversight: I thought I had a copy of it already, thought I picked it up in my first rush of enthusiasm for Jack Vance back in – it might’ve been as far back as 2010 or 2011. I was buying any Vance books I could find and a copy of Madouc, the third volume, has been sitting on shelf since then. One of my strange book-hunting peccadilloes is that I won’t usually buy volumes out of order, even if find volume 4 before volume 2; so I assumed that because I had Madouc, I must also have The Green Pearl.

But I don’t have The Green Pearl, so when I finish Suldrun’s Garden there’s going to be a short but tantalizing mercenary time frame wherein I can’t read what I intend to be reading next, and so can read anything while I wait.

These little lacunae are intoxicating, but also daunting and almost always ultimately futile, because they mean my mind will be buffeted by the thousand contrary winds of moment-to-moment reading impulses, like a sad pennant in a strong storm. In the short span of time since I became aware of this impending gap, I’ve had to watch an endless parade of desires to read this book, this book, no this book, wait this book…..

I want to read Imperial by William T. Vollmann, and I want to read his climate change book Carbon Ideologies. Basically I want to start reading Vollmann generally, and refuse to start doing so on any but the grandest scale.

And I want to read The Path to Power by Robert Caro, while simultaneously not feeling obligated to immediately continue with the volumes that follow it.

Desperately I want to read Ka: Dar Oakley in the Ruin of Ymr by John Crowley. Finding this book was the golden moment of my recent book-rich excursion to Charlotte, and I really am getting late summer/early fall vibes from this one, so I want to fit it in after Lyonesse and before October when I switch over to a meat, blood, and shadow diet of horror novels.

But that doesn’t mean I don’t, also, want to read those horror novels now: I was so happy to get a copy of The Fisherman by John Langan, and I’ve been slowly accumulating interest in The Cabin at the End of the World by Paul Tremblay. I couldn’t finish Disappearance at Devil’s Rock but A Head Full of Ghosts is still the scariest book I’ve ever read. Also I paid for $15 fucking dollars for a pleasantly soft and worn mass market paperback copy of The Ceremonies by T.E.D. Klein. That’s not the book’s fault, and I’d do it again, but it was the first thing that came to mind after I remembered I want to read it too.

Silence by Shusaku Endo was one of the best books I read in 2018; I want to read two of Endo’s other works in particular: The Samurai and Deep River.

Listening to the audiobook of The Stand by Stephen King has replanted an interest in post-apocalyptic fiction in me. So I want to return to an indelible classic, Riddley Walker by Russell Hoban, and also finally check out Earth Abides by George R. Stewart. My interest in the post-apocalypse comes and goes like an eclipse so I feel an especial drive take care of this one while the innate enthusiasm is there.

A Tomb for Boris Davidovich by Danilo Kiš. Found this recently in Coventry in a cover so bland and nondescript that it borders on deeply charismatic.

Peru by Gordon Lish. Don’t know much about Lish other than that he was Carver’s (controversial?) editor; but I’ve read only one Carver story (a fight, a baby) so that fact doesn’t move me one way or the other. I did read the opening paragraph of this one and loved it so I’m intrigued.

My Struggle Vol. 1, by Karl Ove Knausgaard. I’d seen the spine of this book many times – it’s a definite regular in second-hand shops, the same way you always saw copies of Mark of Kri in used game stores – before I dug any deeper, read anything about what, precisely, it is. And now that I have, it seems like something I’d be very interested in, but I’d have to pick this one up being demiready to commit to the whole six-book sequence.

Fortress of Solitude by Jonathan Lethem. I group Lethem with Franzen, Eggers, and Chabon, whether right or wrong – and I suspect it’s wrong, although I also don’t entirely know what this grouping indicates about any of them, or who it’s bad or good for. I just want to read this book at some point.

The Communist Manifesto by Karl Marx and Frederick Engels, the Haymarket Books edition with excellent notes and commentary by Phil Gasper. I’ve been dipping into this in an ambient and rambling fashion, and want to do a minor extended study of it.

Callahan’s Crosstime Saloon by Spider Robinson. I’ve actually been reading this one for a bit now, dipping in when I need to be cheered up. There’s something intensely therapeutic, almost supernaturally serene and calming, about these stories. There’s definitely, eventually, going to be a full-length piece on Callahan’s from me because it deserves it.

And The Makioka Sisters by Junichiro Tanizaki.

I was supposed to read Crime and Punishment last winter. And The Magic Mountain in the spring.

I absolutely have to reread The Tunnel this year. And read Omensetter’s Luck for the first time. I lent it to you, and you read it in that industrious focused way you had, that way I always admired. You read my copy of Anna Karenina in the same way.

Which I also want to read…

If you decide to buy any book on the strength of this post, please consider purchasing it from a local used or new bookstore, or from an independent bookstore’s online storefront.