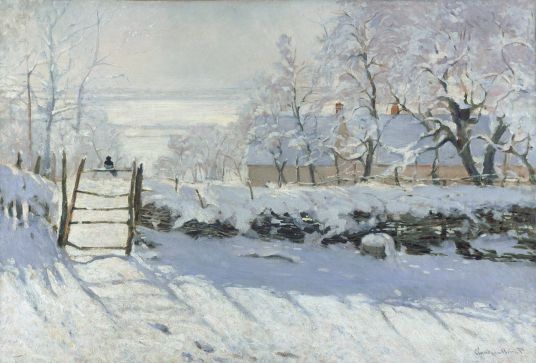 Different families have different methods, at Christmas, of communicating their wishes to Santa. Many send letters, mailing them early and addressing them to the North Pole. These never arrive, postmasters having their own whimsical ways of dealing with them, none involving delivery.

Another method, which the Drinkwaters had always used though no one could remember how they had hit on it, was to burn their missives in the study fireplace, the tiled one whose blue scenes of skaters, windmills, trophies of the hunt seemed most appropriate, and whose chimney was the highest. The smoke then (the children always insisted on running out to see) vanished into the North, or at least into the atmosphere, for Santa to decipher. A complex procedure, but it seemed to work, and was always done on Christmas Eve when wishes were sharpest.

Secrecy was important, at least for the grown-ups’ letters; the kids could never resist telling everybody what they wanted and for Lily and Tacey the letters had to be written by others anyway, and they had to be reminded of the many wishes they’d had as Christmas neared but which had grown small in the interim and slipped through the coarse seine of young desire. Don’t you want a brother for Teddy (a bear)? Do you still want a shotgun like Grampa’s? Ice skates with double blades?

But the grown-ups could presumably decide these things for themselves.

In the expectant, crackling afternoon of that Eve of ice Daily Alice drew her knees up within a huge armchair and used a folded checkerboard resting on her knees for a desk. “Dear Santa,” she wrote, “please bring me a new hot-water bottle, any color but that pink that looks like boiled meat, a jade ring like the one great-aunt Cloud has, for the right middle finger.” She thought. She watched the snow fall on the gray world, still just visible as day died. “A quilted robe,” she wrote; “one that comes down to my feet. A pair of fuzzy slippers. I would like this baby to be easier than the other two to have. The other stuff is not so important if you could manage that. Ribbon candy is nice, and you can’t find it anywhere any more. Thanking you in advance, Alice Barnable (the older sister).” Since childhood she had always added that, to avoid confusion. She hesitated over the tiny blue notepaper nearly filled with these few desires. “P.S.,” she wrote. “If you could bring my sister and my husband back from wherever it is they’ve gone off together I would be more grateful than I could say. ADB.”

She folded this absently. Her father’s typewriter could be heard in the strange snow-silence. Cloud, cheek in hand, wrote with the stub of a pencil at the drum-table, her eyes moist, perhaps with tears, though her eyes often seemed bedimmed lately; old age only, probably. Alice rested her head back against the chair’s soft breast, looking upward.

Above her, Smoky charged with rum-tea sat down in the imaginary study to begin his letter. He spoiled one sheet because the rickety writing-table there rocked beneath his careful pen; he shimmed the leg with a matchbook and began again.

“My dear Santa, First of all it’s only right that I explain about last year’s wish. I won’t excuse myself by saying I was a little drunk, though I was, and I am (it’s getting to be a Christmas habit, as everything about Christmas gets to be a habit, but you know all about that). Anyway, if I shocked you or strained your powers by such a request I’m sorry; I meant only to be flip and let off a little steam. I know (I mean I assume) it’s not in your power to give one person to another, but the fact is my wish was granted. Maybe only because I wanted it more than anything, and what you want so much you’re just likely to get. So I don’t know whether to thank you or not. I mean I don’t know whether you’re responsible; and I don’t know whether I’m grateful.”

He chewed the end of his pen for a moment, thinking of last Christmas morning when he had gone into Sophie’s room to wake her, so early (Tacey wouldn’t wait) that blank nighttime still ruled the windows. He wondered if he should relate the story. He’d never told anyone else, and the deep privacy of this about-to-be-cremated letter tempted him to confidences. But no.

It was true that what Doc had said, that Christmas succeeds Christmas rather than the days it follows. That had become apparent to Smoky in the last few days. Not because of the repeated ritual, the tree sledded home, the antique ornaments lovingly brought out, the Druid greenery hung on the lintels. It was only since last Christmas that all that had become imbued for him with a dense emotion, an emotion having nothing to do with Yuletide, a day which for him as a child had had nothing like the fascination of Hallowe’en, when he went masked and recognizable (pirate, clown) in the burnt and smoky night. Yet he saw that it was an emotion that would cover him now, as with snow, each time this season came. She was the cause, not to whom he wrote.

“Anyway,” he began again, “my desires this year are a little clouded. I would like one of those instruments you use to sharpen the blades of an old-fashioned lawn mower. I would like the missing volume of Gibbon (Vol. II) which somebody’s apparently taken out to use as a doorstop or something and lost.” He thought of listing publisher and date, but a feeling of futility and silence came over him, drifting deep. “Santa,” he wrote, “I would like to be one person only, not a whole crowd of them, half of them always trying to turn their backs and run whenever somebody”—Sophie, he meant, Alice, Cloud, Doc, Mother; Alice most of all—”looks at me. I want to be brave and honest and shoulder my burdens. I don’t want to leave myself out while a bunch of slyboots figments do my living for me.” He stopped, seeing he was growing unintelligible. He hesitated over the complimentary close; he thought of using “Yours as ever,” but thought that might sound ironic or sneering, and at last wrote only “Yours &c.,” as his father always had, which then seemed ambiguous and cool; what the hell anyway; and he signed it: Evan S. Barnable.

Down in the study they had gathered with eggnog and their letters. Doc had his folded like true correspondence, its backside pimpled with hard-struck punctuation; Mother’s was torn from a brown bag, like a shopping list. The fire took them all, though—rejecting only Lily’s at first, who tried with a shriek to throw it in the fire’s mouth, you can’t really throw a piece of paper, she’d learn that as she grew in grace and wisdom—and Tacey insisted they go out to see. Smoky took her by the hand, and lifted Lily onto his shoulders, and they went out into the snowfall made spectral by the house’s lights to watch the smoke go away, melting the falling snowflakes as it rose.

When he received these communications, Santa drew the claws of his spectacles from behind his ears and pressed the sore place on the bridge of his nose with thumb and finger. What was it they expected him to do with these? A shotgun, a bear, snowshoes, some pretty things and some useful: well, all right. But for the rest of it. . .He just didn’t know what people were thinking anymore. But it was growing late; if they, or anyone else, were disappointed in him tomorrow, it wouldn’t be the first time. He took his furred hat from its peg and drew on his gloves. He went out, already unaccountably weary though the journey had not even begun, into the multicolored arctic waste beneath a decillion stars, whose near brilliance seemed to chime, even as the harness of his reindeer chimed when they raised their shaggy heads at his approach, and as the eternal snow chimed too when he trod it with his booted feet.